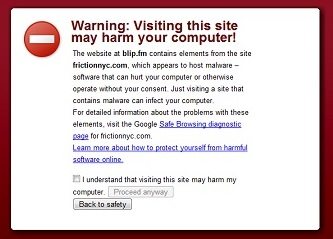 Your website being hacked is a big enough problem to deal with; however, if Google thinks that your site has been infected with a virus, your big problem can become a nightmare.

Google can “quarantine” your site even after it has been repaired. What they aren’t saying is that they are actually blacklisting hacked/infected sites.

There are approximately 60 trillion URLs on the internet and Google is continually scanning each one for malware.

“If Google blacklists an infected website, you’re basically off the Internet until the website is fixed,” said Peter Jensen, CEO of StopTheHacker.com.

According to Google, they flag and quarantine about 10,000 websites every day. The web giant scans search results and ads as well as flagging and suspicious URL that is typed into the browser. Bing deals with infected sites in a like manner.

If your website is blacklisted, this can very quickly destroy your business’ reputation and, in doing so, can also destroy sales. Business owners say they did nothing wrong and shouldn’t have penalties but Google is trying to keep other internet users safe.

Google places warnings on unsafe websites and, according to Google spokesman Jason Freidenfelds, about 1 billion people are protected by these warnings daily.

Margo Schlossberg, the owner of a small online business in Washington D.C., was the victim of hacking in September. When her website was searched on Google, the following message would pop up: “This site may be hacked.”

So what was the result of this?

She lost 50% of the traffic to her site and, right at the beginning of the holiday season, her sales dropped significantly.

Margo hired a company to fix her site and it took a few weeks because more than one of her site’s pages was compromised. Having an expert repair the damage caused by hackers can cost up to $10,000.

If your site is blacklisted by Google, once it is “cleaned up”, you have to resubmit your site to Google.

The Moral of the Story

Investing in good security (not cheap security) and keeping your website updated, with the most recent version of your platform that is available, will make it harder for hackers to get in and cause damage.

More and more websites online are built with a content management system (CMS) such as Word Press, Joomla, Drupal, etc… Keeping your site secure with the most updated version of your CMS and security plugins is more imperative than ever!

When your site goes down ALL emails attached to that domain no longer work.

That is bad enough, but if your site gets blacklisted now it becomes a nightmare! You’ll see a steady stream of $$ going out the window for your business the longer the problem persists.

NOTE: Nothing is 100% foolproof, even the White House, IBM, Facebook, The New York Times and large banks have all been hacked into. But it is very important to make it harder for hackers to get in and cause trouble… kind of like the virus program on your PC, it doesn’t guarantee you will never get a virus, but it lessens the chance quite a bit.

Please contact us if you have any questions and we will be happy to take care of you.